Improvements to your conversion rate are always welcome; I mean, who doesn’t want more orders?

If you double your conversion rate, you double your orders or enquiries, right? Well, not if you’re clever about it. When combined with your marketing efforts, the real benefits can be exponentially more, as the benefits from one improvement fuel further gains. We call this the compound effect.

Just by taking your conversion rate from 1% to 2%, you could get 4 x more orders, without spending more on marketing.

Here’s how the compound effect works

Let’s take a standard e-commerce website that converts at 1%. This website generates much of its sales via social media ads.

You improve the performance of the website through Conversion Rate Optimisation, and the site now converts at 2%.

Because you are converting more visitors, your cost per acquisition goes down, which means you are paying less per customer. You’ve doubled your conversion rate, so you’re getting twice the amount of customers, for the same spend.

If you were previously paying £2 per customer via your ad spend, you would now be paying £1.

This improved performance means your cost per acquisition (CPA) is now half what you were previously paying. You’d still be paying the same amount of traffic, but would be getting twice the number of orders.

If you then reinvest that £1 (50%) saving back into acquisition, you can get double the traffic that you were already getting. What’s really cool, is that this new traffic also converts at the new, improved conversion rate.

Roughly speaking, you would be getting four times more orders than you were previously. This exponential growth is called the compound effect and really can be a game-changer for businesses.

Let’s see how it works in the real world

Now we understand how the compound effect works; here’s a real-life example. 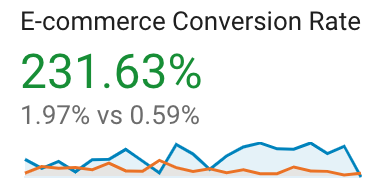 A site I have been working on has recently seen a 231% increase in its conversion rate.

Cost per acquisition came down significantly, which meant that new customers were available at a massively reduced cost.

This meant that the Ad campaigns were working hard for their money. As a result, the marketing team were able to double the traffic.

Let’s take a look at what that meant in terms of Traffic V’s Orders. Note the traffic levels and the order numbers.

Logic suggests that if you double the traffic levels, you get twice as many orders. In general, yes, but if that increased traffic is as a result of reinvesting savings made by improved conversion rates – lower CPAs, the compound effect really kicks in. The net result, in this case, is a 550% increase in orders!

The compound effect doesn’t stop there!

The added bonus here was that Ad spend didn’t go up, in fact, it was 4% down. Let’s take stock of that for a minute.

As you can see, the compound effect of tweaking your website’s conversion rate can be quite profound.

What’s encouraging is that improvements like this are achievable if you can just identify why users are struggling on your website. Quite often, it can be something simple.

If you’d like to improve your website’s conversion rate to get more orders without spending more on ad spend, please get in touch, I’d love to hear from you.

Any cookies that may not be particularly necessary for the website to function and is used specifically to collect user personal data via analytics, ads, other embedded contents are termed as non-necessary cookies. It is mandatory to procure user consent prior to running these cookies on your website.